Denis Dubourdieu has died. He was a great winemaker, a Bordeaux oenologist, a château owner and the « Pope of White Wine ».

Denis Dubourdieu was born in 1949 in Barsac (Gironde). In 1975 he left Bordeaux area to study agronomy in Montpellier. After that he made the choice to go back home to study at the Bordeaux University for a PhD. Afterwards he joined his father to work on the family chateaux: Château Cantegril (Sauternes) Château Reynon (AOC Cadillac), Clos Floridène (AOC Graves), Château Doisy Daëne (Barsac) Château Haura (AOC Cérons). 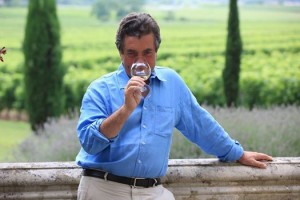 Denis Dubourdieu was a winemaker but also a teacher, an oenologist and a great scientist-practitioner

In 1982 Denis Dubourdieu began teaching oenology at Bordeaux University where he was the mentor of some famous French and international winemakers. As scientist he is renowned for his studies on white wines (especially on the Sauvignon Blanc), yeast, pH and colloids. He was also the CEO of the ISVV Bordeaux (Bordeaux Science Institute of Vine and Wine).

Denis Dubourdieu was also a consulting oenologist in France and abroad for some wineries as Château Carbonnieux, Château Lafaurie-Peyraguey, Yquem, Château Lafon Rochet, Château Haut-Bailly … Recently he was named as “Decanter Man of the Year 2016 ” by the renowned British magazine. In march he was rewarded with the French legion of honor.

He was a wine lover but also an art lover …

Personally this news makes me very sad. I had the opportunity to meet Mr. Denis Dubourdieu twice when I started to work in the wine industry. During these times he spoke to me passionately about his job and touched me with his sincere approach of wine / oenology and his hundreds anecdotes.

With wine we offer happy moments. We produce 550,000 bottles a year in our family properties. If each bottle is tasted by four people then we give 2.2 million of happy moments! ” (Denis Dubourdieu, 2012 vertdevin interview)

Fascinated by the world of wine, Denis Dubourdieu was also passionated by arts and letters.

My sincere thoughts and my condolences to his family.