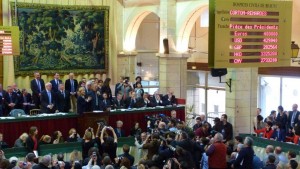 This year, the Climats de Bourgogne were included in UNESCO’s World Heritage List. The Hospices de Beaune and Christie’s are delighted to have achieved another record sale, with a grand total of over €11M. 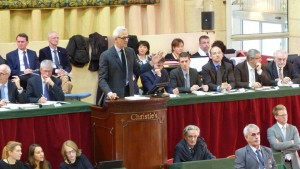 Antoine Jacquet, Director of the Hospices de Beaune commented: « Despite the events that occurred on November 13 in Paris, we took the decision to maintain this charity auction to benefit the hospital. The funds resulting from the sale of the Piece des Présidents will be equally shared between l’Institut Curie, The Fondation pour la recherche sur les AVC, and the Fédération Nationale des Victimes d’Attentats & d’Accidents Collectifs (FENVAC). I am particularly pleased that Ludivine Griveau, vineyard-manager and wine-maker of the domaine has joined our team this year, given the exceptional quality of the vintage. »

Ludivine Griveau, vineyard-manager and wine-maker of the domaine declared: “We could not have hoped for better results to celebrate this exceptional 2015 vintage. Particularly favorable weather throughout the growing season allowed Burgundy’s great vine varieties – Pinot Noir and Chardonnay – to express the region’s terroirs beautifully”. (Read more about the quality on this link) 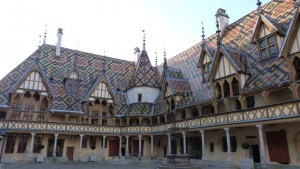 Since 2005, Christie’s has partnered with the Hospices de Beaune, together organising not only the yearly sale in Burgundy, but also arranging dinners and tastings of the Domaine’s wines in the USA, Europe and, since 2010, across Asia. This year, South America experienced the wines and traditions of this extraordinary auction thanks to our presence in Rio de Janeiro and Sao Paũlo.

Agathe de Saint Céran, Head of the Hospices de Beaune sale: « After a minute of silence and the National Anthem sang by the whole saleroom, the négociants as well as private buyers from around the world paid tribute to the victims of the Parisian attacks by their presence and participation. Indeed, this year, 60% of the barrels were acquired by the négociants and 40% by private buyers. We registered bids from Europe (76%), Asia (19%), and the United Stated of America (5%). » 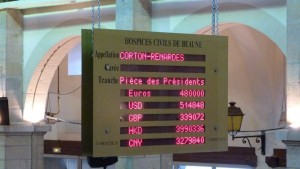 Since 1978, the Hospices de Beaune have each year donated one or more barrels, known as the Pièce des Présidents, to be auctioned for carefully selected charitable purposes. From the 1945 vintage onwards, an Honorary President has presided over each wine sale. This year, the president’s barrel, containing 228 liters of Corton- Renardes Grand Cru – Cuvée des Présidents, was sold to benefit two charities. Claire Chazal represented the Institut Curie and Christophe Lambert stood in for the Fondation pour la recherche sur les AVC. A generous French benefactor acquired it by setting a new record with 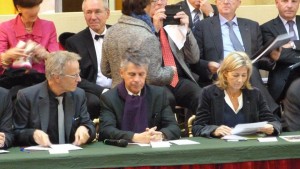 480,000 euros. This year, in the light of the Paris terrorist attacks on November 13, Claire Chazal declared: “In the aftermath of the tragic events, the Pièce des Présidents will also be dedicated to the victims’ families. I am pleased and moved to be here today. It was necessary to maintain the auction. I am representing the Institut Curie which develops innovative therapeutic and diagnostic techniques such as immunotherapy”. And Christophe Lambert added: “I stand here today for the Fondation pour la recherche sur les AVC, as also for the Institut Curie and in order to support the victims of the terrible acts which happened in Paris. It is important that we should all be united against these acts, so that such as such tragic events do not happen again.”