The 2015 vintage started out well, with ideal conditions. Bud burst, which occurred a little on the late side, took place without incident and there were no springtime frosts this year. Then clement temperatures combined with heavy rainfall in April, allowed the vines to catch up any delay. By springtime, the pace was set indicating that 2015 would be an early vintage. The vines flowered quickly in early June, positioning the vintage with an advance of a few days over the 10-year average, suggesting that the harvest would start in the first days of September.

This year was also marked by the exceptional weather during the summer, which was sunny and hot : very hot, in fact. There was also very little rain, especially during July. The lack of water brought on by the heat wave slowed the development of the vines in some areas, but a few showers in August kick-started the growth cycle again.

On the eve of the harvests, the vintage was already promising to be an exceptional one, with golden, healthy berries packed with sugar. They just needed to be picked.

However, on 1 September, a hailstorm passed over the Chablis winegrowing region along a narrow corridor from Irancy, through Chitry and Courgis, alongside Montmains, and right up to the Colline des Grands Crus. It mainly hit the Climats of Les Clos, Blanchot and Montée de Tonnerre. More than 300 hectares of the 5,400 that make up the Chablis winegrowing region were affected to a greater or lesser extent.

Thankfully, the vintage was an early one. So by the start of September, the grapes were already ripe, and the remaining fruit in the damaged plots was quickly brought in to preserve its quality. What’s more, the solidarity enjoyed among the winemakers was evident. Those who had been spared the hail lent their labour and machines to their less-fortunate colleagues to help them harvest as quickly as possible. Overall, despite a few estates being hit hard, losses were limited and the wonderful quality of the vintage saved. 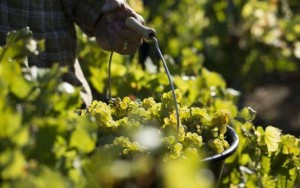 « The unharmed grapes were picked over two weeks; the bunches wonderfully rich in sugar and with a very satisfactory level of acidity. Alcoholic fermentations produced fruity notes, and this sunshine- filled vintage will no doubt be less chiseled and less saline in style than the 2014 vintage. »

Jacques Lesimple, oenology advisor in Chablis, confirms that 2015 will be a very good vintage: « Some feared a lack of acidity but that’s not the case – very few wines lack vivacity. This 2015 vintage is a sunny one, which stands out for its fruitiness. It will give rise to wines which are very accessible for consumers. For me, it can be classified as a very good vintage.»