2015 Vintage: The Beaujolais Nouveaux have arrived !

2015 Vintage: The Beaujolais Nouveaux have arrived ! 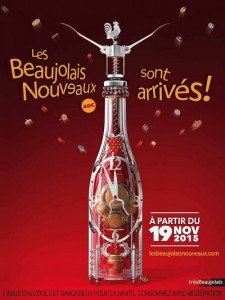 A new vintage but also a marketing campaign

The Beaujolais wine trade organisation (Inter-Beaujolais) is continuing its revitalisation of the image of Beaujolais and Beaujolais Villages Nouveaux by once more highlighting French skills and creativity. « The new marketing campaign takes its inspiration from the world of fine clock and watchmaking : Attention to detail, precision and a unique expertise that combines both the modern and the traditional… there are many parallels with the new Beaujolais wines. Just like a precious timepiece, they take their time, mark time, arrive with impeccable timing, to give pleasure every time… and the Nouveaux are just perfect for wine o’clock! » 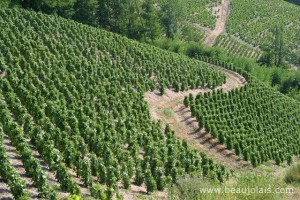 « This year intense heat and historic levels of sunshine allowed the Beaujolais vineyards to maintain sanitary conditions that were practically perfect. The grapes finished ripening in excellent conditions, thanks notably to intermittent showers in August. The grape pickers were therefore able to harvest superbly ripe little berries of exceptional quality, with firm, thick skins.

Complete phenolic maturity was attained and the degrees are naturally high. Such remarkable maturities have not been seen within living memory in Beaujolais. It is nevertheless a vintage that has remained beautifully fresh. The first vats to finish their alcoholic fermentation are showing lovely full fruit aromas, ripe but never cooked.

The only slightly disappointing aspect of 2015 is the volume. The high temperatures, and more especially the lack of rain in the first half of the year resulted in low yields. The total harvest should therefore be in the order of 600 000hl in 2015, compared to around 756 000 hl in 2014. » (Inter-Beaujolais)

How are Beaujolais Nouveaux 2015 ?

« The richness of the 2015 wines explodes in the mouth, with immense smoothness and generosity without ever losing precious balance. The wines are extraordinarily rich and opulent with solid tannic structures foretokening a vintage for laying down. The tannins are firm but always silky and full of finesse. Wines with perfect balance between acidity, fruit and tannins… all the conditions are ripe for 2015 to be a truly great vintage in Beaujolais.

The wines are of great intensity and depth of colour, with 2015 showing the highest colour potential since 2002. In terms of colour and structure, notably, 2015 reminds us of 2009 and for some of our elders, 1947: two magnificent vintages of proven ageing potential. » (Inter-Beaujolais)

What are Beaujolais Nouveaux wines ? 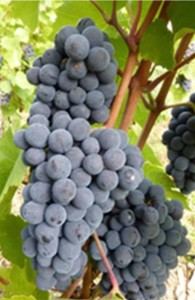 Beaujolais Nouveaux are primeurs wines produced in 2 wine appellations of Beaujolais (Beaujolais and Beaujolais Villages). It is almost exclusively produced from the Gamay Noir grape. Usually this wine is unfiltered of just a little bit. So you can find pulp of grapes in your glass. They have a bright color. The nose and mouth are very fruity, slightly tannic and gourmand. It is a wine appellation reserved for red wines and rosé wines. They have to be enjoyed fresh (around 10-11° C, 50 / 51,8°F).

They cover almost 10.000 hectares (24710,54 acres), producing not one Beaujolais Nouveau but many different ones whose characteristics vary according to the terroir and the winemaker’s personal touch.

The production of Beaujolais and Beaujolais Villages Nouveaux has increased from 15 000 hl (2 million bottles) in the 50’, when the anticipated release of new wines was subject to authorisation by the customs and taxation authorities, to an average of 210 000 hl (28 million bottles). This increase is due to the worldwide success of this singular wine which has become a veritable phenomenon of society.

If Beaujolais and Beaujolais Villages Nouveaux can be tasted from the third Thursday in November, don’t be afraid to leave a few bottles in your cellar. They will be perfect for Christmas and, why not, for the first barbecues of spring!