Thierry Grenié-de Boüard, 29, is the second representative of the eighth generation of the Boüard de Laforest family, after Stéphanie de Boüard-Rivoal in 2012, to join the management team of Angélus.

In spring 2016, it was his turn to accede to the joint request of his father, Jean-Bernard Grenié, and his uncle, Hubert de Boüard de Laforest, to join them in the top management of Angélus. 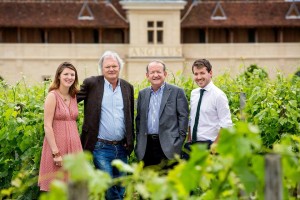 Born in 1987 in Libourne, Thierry Grenié-de Boüard grew up on the family estate in Saint-Emilion. After management and marketing studies which conducted him from England to Germany, and Australia, he multiplied experiences abroad in wine trade. In parallel, he also took part in the vinification of Château Angélus and Klein Constantia.

Thierry Grenié-de Boüard, member of the Supervisory Board of Château Angélus since 2014, is now exclusively focusing on the family business alongside his cousin, Stéphanie de Boüard-Rivoal, third woman to incarnate Angélus since the foundation of the vineyard estate by Jean de Boüard de Laforest in 1782.

Thierry Grenié-de Boüard is graduated in foreign affairs from the University of Hull in the United- Kingdom, he holds a Master degree in management from the EBS Universität of Wiesbaden in Germany, and a Master II in marketing from Kedge (Bordeaux). Then his professional career led him from Berry Bros in England to McWilliam’s Wines Group in Australia where he spent less than a year, before joining Hawesko in Germany. His last appointment was wine buyer in Berlin for Wine in Black, one of the most dynamic internet players in this sector.