The Fédération des Tonneliers de France confirms for 2014, the stable production it experienced in 2013. 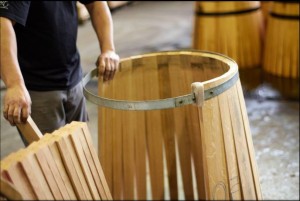 The organization’s 51 member cooperages manufactured 524,500 barrels, accounting for sales of 342 million euros. On a like-for-like basis, the market trend observed was toward stability in value and a slight 3% drop in volume.

The slight drop in the number of units sold is the result of an increase in the use of larger barrels and slower business in the southern hemisphere and in China. Specifically, “large containers,” supplied by 17 of the 51 member cooperages, is a growing segment. Roughly one thousand large containers were sold in 2014, for sales totalling approximately 24 million euros (7% of total sales).

French coopers continue to be recognized the world over because of the quality raw material they use and the expertise they evidence through a combination of ancestral craft skills and highly innovative techniques. As proof, exports represented 66% of their business and sales of 236 million euros (69%) in 2014.

The markets French cooperages are in are sharply international and highly diversified. Still, these markets are focused in five countries that represent 80% of the world market: France (where a normal harvest has helped bring back stability), the United States (where growth has been good for the second year in a row), Australia, Italy, and Spain.