Several vineyards and wineries destroyed in massive wildfires devastating the north of California. 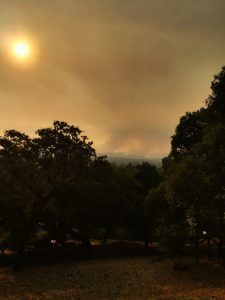 The North of California has affected by one of the worst fires in its history. The fire which benefits from a strong wind has difficulty to be stopped by firefighters. In addition to the wind, the fire benefits from a 2016/2017 winters that was rich in water and a warm 2017 summer. Both are favored the growth of the vegetation and the drought. Wind is expected to ease on Tuesday.
Currently a dozen fire are raging the Napa Valley and the Sonoma County. The two largest blazes are situated in Napa Valley’s eastern hills, near Atlas Peak, and in the northern part of Sonoma’s city of Santa Rosa. The South of Napa, Carneros, Santa Rosa and the Silverado Trail are particularily affected.
Cal Fire estimates that more than 73,000 acres have been scorched by fire. An estimated 20,000 people have been evacuated. Thousands of private/business building are destroyed.

A huge impact on the Napa/Sonoma wine industry

Electricity and cellular service are down in many areas. Power cuts have a substantial impact on vinification for those who already picked grapes and who are able to stay in wineries.

The smoke and ash impact 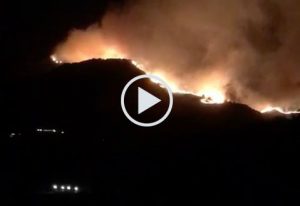 Smoke from bushfires has negative impacts on the quality of grapes and wine by causing undesirable smoky flavours and aromas. All the smoke and ash hanging in the air could easily transfer the taste to the grapes and potentially changing the quality of the wine.
The impact of smoke from wildfires is generally greater due to a combination of intensity, duration, topography, wind and proximity to the fire.

The state of emergency is declared. This morning it has extended to Butte, Lake, Mendocino, Nevada and Orange Counties. If you wish to support the Napa / Sonoma industry I recommend to buy (directly to wineries) a case of wine. Good luck to our Californian friends! Stay safe!