After a very busy start of the year on the promotional plan with 3 trips abroad (Germany, US, Asia), the winemakers of the Union of Côtes de Bordeaux will once again be on all fronts in the second half 2014 to continue their intense promotional program. After their participation in September in Belgium at the event « Eat! Brussels Drink! Bordeaux », many appointments were organized internationally to arrive in Asia and Europe. 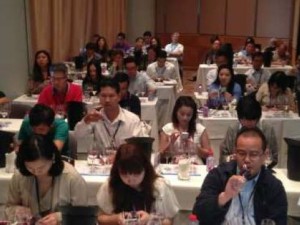 A few months after their arrival and their success in Prowein, Côtes de Bordeaux will be back in Germany in November. This time, the Côtes de Bordeaux will meet professionals of distribution (importers, wholesalers, wine shops), the hotel, restoration as well as sommeliers and journalists from the press professional masterclass organized in Munich (November 3) Cologne (10 November) and Frankfurt (11 November). A new opportunity to strengthen the reputation of the wines of Côtes in this market.

In the end, a dozen operations on three weeks across Asia and Europe! Many initiatives to come for Union des Côtes de Bordeaux to get closer to its goal of increasing its visibility and double its market share in export markets.