After recognizing the “Bordeaux” appellation on June 29, 2015, China has now announced the recognition of all Bordeaux AOC still wines as geographical indications (GI*).

Considering the number of appellations concerned, the Bordeaux winegrowing region is the first to benefit from recognition of such magnitude. To date, only 5 other foreign Geographical Indications for wines and spirits have been recognized by China (Cognac, Champagne, Napa Valley, Scotch Whisky and Tequila).

The recognition of designations, not long engaged in 2011 in Process 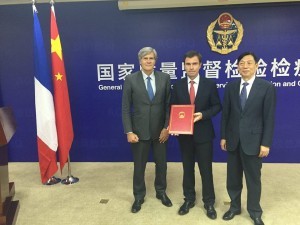 In view of the performance of Bordeaux wine exports in China, the Bordeaux Wine Council (C.I.V.B.) looked into the issue of protecting its appellations very early on. Consequently, back in 2011, the C.I.V.B. undertook initiatives aimed at the recognition of the GI status and the registration of collective brands. Those initiatives by Bordeaux wines were welcomed favorably by the Chinese authorities. The strong cooperation that followed took the shape of valuable exchanges between Chinese and French experts, with trips both in China and Bordeaux aimed at becoming immersed in and understanding the realities of the terroirs encompassed in the Bordeaux G.I.s.

Bernard Farges, C.I.V.B. president: “I hail the strong involvement and in-depth work of the A.Q.S.I.Q.** which explored all the details of this complex topic and successfully conducted the administrative procedures leading to this recognition. The common views between China and France concerning the importance of the G.I.s as well as the constant support from the Ministry of Agriculture and the French embassy substantially contributed to the successful outcome of this issue”. 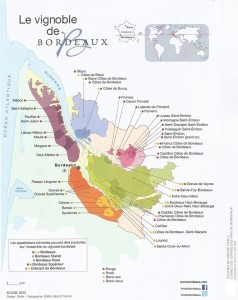 Assistance to the fight against fraud

And that rich collaboration is going to continue. The A.Q.S.I.Q.’s offer to perpetuate the collaborative effort was indeed greeted very eagerly by the C.I.V.B. These measures will now make it possible to benefit from all the potential for protection resulting from this recognition. They will allow Chinese authorities to fight misuse more effectively. Covered by Chinese law, the recognition of the G.I.s enables increased protection of our products, from which Chinese consumers will benefit.

Lastly, the success of this GI recognition procedure is a show of support by the generic body, benefiting 6,500 Bordeaux wine producers and 300 merchants as well as the Chinese professionals working on this market.

Below you will find the list of names involved: