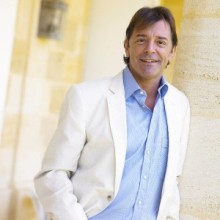 Château Lafaurie-Peyraguey ‘s largest neighboring Sauternes, including Chateau d’Yquem, and the merits of his sweet white wine have been recognized at all times, including during the 1855 classification, where it appears in 2nd place in the list of Premiers Crus Classé.

The vineyard of 36 hectares of Lafaurie Peyraguey is located on the upper part of the gravel terroir of Sauternes, 70 m above sea level , close to Chateau d’Yquem. The plots of “L’Enclos” and ” Red House ” represent the historical heart of the great terroir of Château Lafaurie-Peyraguey.

This vineyard of 36 ha in production, is grown in pest management without any chemical herbicide. The vines are composed of 93% Semillon, Sauvignon 6%, and 1% Muscadelle, with an average vine age of 40 years (the oldest is from 1926), and average yields of 18 hl / ha.

Alcoholic fermentation and aging of wines is made in barrels of French oak grained, 40 to 70% of new barrels depending on the year, for an average annual production of 60,000 bottles.

Why does Silvio Denz choose to invest in Sauternes?

The draft of  Silvio Denz for Lafaurie Peyraguey

The objectives of Silvio Denz to Lafaurie Peyraguey are clear and long term.

Produce a great wine Dry white to maximize the potential of the other territories of Sauternes !

Château Lafaurie-Peyraguey, sweet wine and dry white wine will complement the range of red wines of the 7 areas Vineyards Silvio Denz in Bordeaux, Spain and Tuscany.

This is an invitation that Château Lafaurie-Peyraguey and Silvio Denz offers , with a draft of wine tourism receptive prestige Sauternes is not equipped today.

The architecture of the Château Lafaurie-Peyraguey is particularly well suited with its 13 rooms that can accommodate professionals, amateurs and visitors.

4) create a common history with LALIQUE

A project to create an engraved under the emblem of Lalique in the continuity of the two lines of decanters and glasses created by René Lalique, ” Yquem ” in 1934 and “ Barsac ” 1939 bottle.