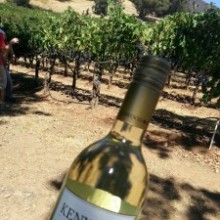 I do not usually comment on individual purchases of property that take place in the wine sector, but this time I would like to dedicate a short article.

I was lucky to be there two years ago in California to discover that winery. During my various interviews in California. Kenwood is known in this part of Sonoma as much for their production and their specificities. Until now it belonged to the F. Korbel & Bros.

Kenwood Vineyards & Winery is a property that has a rich history in which mixes Italian immigrants, literature with Jack London and art. In fact, each year an artist is commissioned to design the label of the wines. I would not want to tell you more about it, but surely invite you to to read the article that was dedicated to the Kenwood Vineyards & Winery. Kenwood produces « pleasante » wines, terroir wines (marked by the terroir of volcanic rock), fruity, slightly woody and issue price is in the middle of what is happening in Sonoma (find a bottle less than $ 16/18 is a complicated task in this region).

Every year the property produces about 500,000 cases. The price range of wines Kenwood currently ranges from $ 9 to $ 45. On 24 April 2014 Pernod Ricard USA has announced the acquisition of these vineyards. This acquisition is the first in California is made with the aim of expanding the range of U.S. wines to reach a “critical mass in the U.S. market ” but also to continue its presence on the various wine regions world. Indeed, the group already owns many vineyards around the world (Graffigna, Campo Viejo, Montana, Jacob’s Creek, Brancott Estate, Mumm Napa … ). The sale is estimated by Reuters about $ 100 Million is expected to close on or about June 30, 2014.

“Thanks to its historical roots and its premium positioning in the heart of the prestigious area of Sonoma, Kenwood adds real value to offer wines Pernod Ricard USA.” Commenting on the transaction, Chief Executive Officer of Pernod Ricard, said: “Kenwood will support the company’s ambition in wine and fits ideally within Pernod Ricard’s multi-origin wine portfolio strategy. In addition, this transaction illustrates Pernod Ricard’s ability to seize tactical growth opportunities that can benefit our entire portfolio in key markets such as the United States.“(Bryan Fry)

The U.S. acquisition, according to Bryan Fry (CEO of Pernot Ricard USA) Kenwood is the first of a long list of  acquisitions.” We are committed to significantly expand our U.S. operations, and the acquisition of a large vineyard in California is a great step in this direction. ”